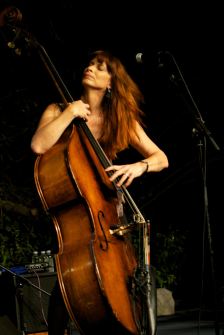 Although Leitham plays in the conventionally left-handed way, she describes herself as, ‘ambidextrous but I favour my right hand a little more, which puts my stronger hand on the fingerboard’.

She recalls that bassist Red Mitchell also ‘felt that left-handed people should play right-handed’ because ‘much of the character in a bass player’s sound is from your grip strength’ and passes that on to left-handed students who seek her out for tuition:

She considers that the conventional approach to string instruments is really, ‘a dumb religious, Western tradition’, its origins going ‘back to the time when being left-handed was thought of being the work of the devil’. She believes the right hand was chosen for bowing and plucking:

Leitham often plays idiodextrously, especially when teaching, sitting in or borrowing a bass on tour and once even played ‘upside down’ on live national television. She describes how she has to ‘think and simplify’ when playing in that less familiar way and notes that it playing for any length of time can make her ‘a little dizzy’. Leitham likens the effect of switching between the two approaches (idiodextrous and conventionally left-handed) in quick succession to ‘vertigo’:

“My hands wouldn’t go the right way. I can’t do it too long or my brain will stick to that… I think I zero in so much on … trying to make it not physical, that what I’m playing is coming out of my head, [switching] messes my brain waves up [laughs].”

Leitham met Earl May twice and remembers how they, ‘hit it off nicely because we were both dealing with that bit about being different’. Watching Earl play, she noted that he was an ‘ultra supportive player’ with driving time and ‘a knack for playing a great bassline’, but observed one peculiar aspect of his vocabulary:

She likens May’s musical successful implementation of an idiodextrous approach to the more general case of bassists like Charlie Haden, who, ‘had a really unorthodox left hand technique on the string bass, yet was able to make brilliant music.’ She asserts that because there is ‘a certain ergonomic aspect to playing the bass that’s unique to each player’, as long as a musician has ‘the skill and the desire and the ear… there’s no “easier”, it’s just what calls to you and what you practice.’

Leitham’s first teacher was Al Stauffer, who never saw her handedness approach as a limitation and enjoyed in lessons relating ‘as though we were looking at each other in a mirror’. Stauffer helped Leitham get her first bass converted in the 1970s – the first instance of this practice documented so far.

She was refused tuition only once, by Roger Scott of the Philadelphia Orchestra, who was ‘really a traditionalist’. Leitham sought lessons from Scott because, as someone who is ‘more right-handed than left-‘, playing with the bow is perhaps ‘more of a challenge than for a lot of people’, requiring constant practice ‘to feel like the left hand can relax’.

Asked about her individual voice as an improviser, Leitham concludes that:

“Well, obviously being a left-handed bass player, bucking tradition is sort of a foundation in what I do… I consider the bass a melody instrument and I have no qualms about playing a tune from beginning to end where I never even play a bass line. But, at the same time, I honour the traditions – and I just love to sit in the groove and swing my butt off. That’s as much fun to me as playing a really notey solo.”