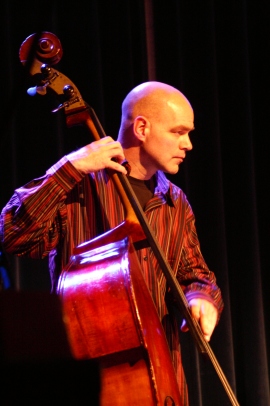 As well as working with jazz greats Rashied Ali (for 9 years), Benny Golson and Randy Brecker, Teepe (1962-) has been a featured soloist with several orchestras, recorded 10 albums as leader and is an active composer and producer. The Dutch-born bassist has been based in NYC since 1992.

Teepe notes that he doesn’t ‘see any advantages’ to playing in the conventional left-handed way:

“I just picked it up this way and now I’m stuck with it… I had no idea that I would become a professional bass player travelling around the world. [laughs] It’s been a drag to carry around the basses. But it’s also good ‘cause you have your own instrument, so you know what you get.”

Whenever transporting his own left-handed bass on long tours would be difficult, Teepe borrows right-handed basses and switches the strings himself, which takes ‘about forty-five minutes’ before and after each gig. He notes that sometimes that when playing on right-handed basses re-strung left-handed, the angle of the fingerboard can be problematic – particularly when ‘it has a huge ridge under the E, then it’s really hard to play’.

Teepe met Earl May in NYC during the mid-90s and ‘was very happy to meet him because we were both lefties’. Earl used to tease him at gigs by inviting him to sit in on his right-handed bass, but Teepe would rise to the challenge:

“I would still sit in. ‘Cause I can play both ways [conventionally left-handed and idiodextrously]. I’ve been to so many jam sessions… you have to think about ‘ok, the F is there, instead of there’… you go up this instead of this way. I don’t do it seriously, but I can get away with it.”[2]

Teepe believes that while adopting an idiodextrous approach might have logistical appeal for enabling access to regular right-handed instruments, he considers it to be a technically challenging way to play. He identifies ‘sound [as] the biggest problem’, noting that:

“Some basses don’t sound good when you pull the strings the other way – if you don’t change the sound post and the bass bar… the sound is much thinner. I always turn it up a little bit on the amp… and then drink a couple of beers so you don’t think too much, then you just listen to yourself and it’s ok.”

Teepe recalls that in his early years as a jazz musician, being left-handed gave him ‘a cool excuse’ to not sit in at a jam session if he felt intimidated, which gave him ‘a lot of chances to observe and learn’. While he never felt any negativity from his Dutch conservatoire teachers towards his handedness, Teepe did feel ostracised when his sister, a classical flautist, asked him to ‘fill in with the orchestra’ where he was made ‘to sit on the outside… because I was bowing the other way. But later in my life I wrote three symphonies and I played as a soloist with orchestras, so…’

[1] Teepe notes one exception – he bats right-handed in baseball, because ‘it’s the same way you hold a [left-handed] bass’.

[2] Teepe has also observed the even more rare, technically also idiodextrous instance of bassists playing right-handed on his left-handed bass at jam sessions, but notes that usually ‘they can only play ballads or blues’.